文Á
Website Accessibility
(425) 456-4000
12111 NE 1st Street
Students
Families
Community
Staff
Welcome Back: Find out about the first day of school and other back to school resources

Congratulations to Odle Middle School’s Space Potatoes who won the International Rocketry Challenge in London this summer.  The team included Mikaela Ikeda, Stephanie Han, Karl Deerkop, Srivatshan Sakthinarayanan and Larry Jing.
The students were recognized by district staff and the school board at the Sept. 20 school board meeting.  King County Councilmember Claudia Balducci’s Chief of Staff, Krista Camenzind also recognized the students at the meeting with the following proclamation on the councilwoman’s behalf: 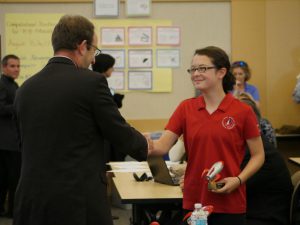 WHEREAS, Bellevue’s Odle Middle School students, the Space Potatoes, represented the United States and took 1st place in the International Rocketry Competition in London on July 15, 2016; and,

WHEREAS, the Space Potatoes blazed their way through the Team America Rocketry Challenge during the 2015-2016 school year and defeated thousands of contestants and hundreds of teams from the U.S. to win the  honor of representing the U.S. at the International Rocketry Competition; and

WHEREAS, the team took first prize by designing, building, and launching a rocket that would carry two raw eggs to an altitude of 850 feet and return them safely to ground, uncracked; and

WHEREAS, the Space Potatoes received $20,000 in scholarships and financial support for continuing the school’s rocketry program; and

WHEREAS, the team’s coach and teacher, Brendan Williams, holds a lottery each year for the many eager students wanting to engage in STEM co-curricular activities and continues to provide an outstanding STEM curriculum;

DATED this twentieth day of September, 2016.