Fourth graders in Maya Aguilera Stevens’ class at Cherry Crest have been celebrating diversity and equity. While learning about their own identity and about classmates’ identity they engage in respectful conversations through varied, creative projects.

“I’ve learned a lot about celebrating diversity in Ms. Stevens’ class because we have so many people coming into the United States and trying to fit in,” said fourth grader Sonia Devaraju. “And we have a lot of different cultures in our classroom. We can have different skin tones, but that doesn’t mean anything – it’s about the inside and how much people feel about their own culture.”

To begin the year students studied Native American history in Washington state and discussed characteristics of historic Native Americans to better understand traits that comprise a person’s identity.  Discussing identity in social studies curriculum allows the class to learn about identities from different people in history, while also connecting to and recognizing characteristics that form their own identities.

Devaraju learned that “identity means my race, my culture, my inside – not just how I look.  I don’t need to look pretty or look like a famous person to be famous or cool.  I just need to be myself and learn how to be myself.”

Throughout the year, Aguilera Stevens shares her own story growing up as a Cuban-American, being bilingual and bicultural and what that means to her in terms of her own identity.

As she shares her own story, she has seen students open up and relate to her.

“Even though we stay in English mostly in my classroom, students seem warm to the idea that there’s an adult who is teaching me who maybe has an understanding that it’s not English only all the time,” Aguilera Stevens said.  “They also see there’s not only one way to do things and that we all show up in a variety of ways.  At home it might be different than it is here at school.”

Aguilera Stevens also builds a relationship with each student in her class, to better understand them and their goals.

“Building the relationship is most important to me to meet them at their needs, at their level,” she said.  “I want to make a good relationship so we can move forward in a positive learning environment and have a successful year.” 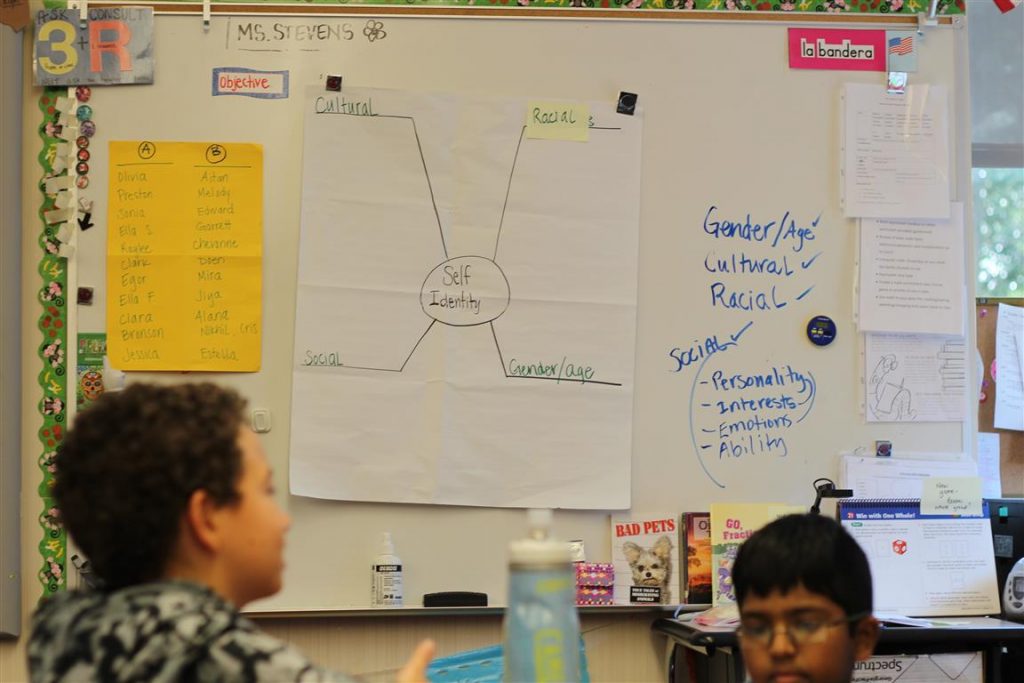 This spring Aguilera Stevens’ students are expanding their learnings from their own identities to learning about one another, including how to respectfully ask questions about one another’s race, culture and social identity.

As part of this work, students were tasked with interviewing each other and then creating a logo that depicted what their partner shared.  Students asked one another questions about their preferred activities, their friends and their cultural heritage.  They also learned that a useful strategy to learn about one another is to share information about themselves before asking their classmate for the same information.  For example a student may say, ‘I’m from Cuba – where are you from?’

The goal of this exercise is to understand where classmates come from, find commonalities and celebrate differences.

“I’m trying to invite the other students in so we can get to know each other and really be in commUNITY,” said Aguilera Stevens. “Part of knowing us, is we’re able to invite others into our classroom; celebrate ourselves and celebrate others.”

Through community building, learning about identity, diversity and getting to know themselves and their classmates, Aguilera Stevens is seeing growth in each of her students.

“Ultimately I would like students to get closer to identifying who they are, feel like they know who they are so they can feel good about themselves,” said Aguilera Stevens. “Then they can come from that place of strength and empowerment and show up as a fuller person and be able to interact in a meaningful way.”