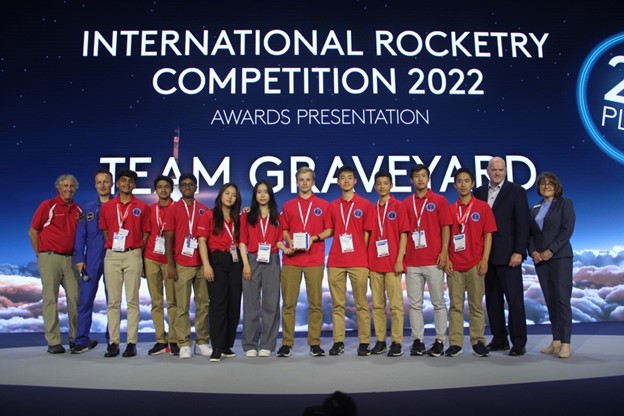 The student rocketry team from Newport High School recently placed second at the International Rocketry Challenge held at the Farnborough International Airshow outside of London. The students, who were representing the United States, finished behind Team Japan whose win marked the first time an all-girls team claimed the top prize. Teams from France and the United Kingdom placed third and fourth, respectively. Newport High School earned the chance to represent the United States in the international competition after placing first at the American Rocketry Challenge national finals held in May.

The annual competition challenges middle and high school students to design, build and launch model rockets with the goal of inspiring students to pursue careers in aerospace and STEM. The International Rocketry Challenge requires teams to launch two raw hen eggs to 835 feet and return it to earth safely within 41 to 44 seconds. In addition to the rocket launches, students are required to deliver a presentation about their rocket design and lessons learned to a panel of industry experts. Rocket flights are worth 60% of a team’s overall score, and the presentation accounts for the remainder.

As stated by Greg Hayes, Chairman and CEO of Raytheon Technologies, the sponsor of Team USA at the International Rocketry Challenge for the past 15 years, “these students, with their incredible ability to collaboratively innovate, are exactly what we need in our future leaders as we look to create a safer, more connected world.”