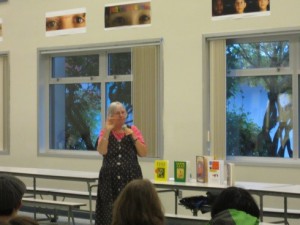 With the ease of a wise communicator, Margaret captivated 75 restless students with myths and stories she has heard first-hand during her world travels. Hand gestures, voice fluctuations, expressive language and movement made these fables come alive and taught our students skills they can use as they write and tell their own stories. After telling a few of her favorites, Margaret then had her audience get up and tell a story to the wall with expression. Practiced and ready to go, a few students stepped up to the challenge and did some story telling of their own. To Margaret’s surprise, these Big Picture students were comfortable with the microphone and not afraid to use it. 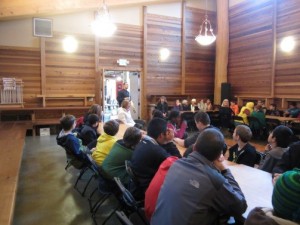 But, the fun didn’t stop there. A short week later on Oct. 22nd, our oral storytellers were off to the Duwamish Longhouse in South Seattle. There we were greeted by a Salish cultural leader who entertained the students with traditional stories (teachings), song and dance. They also learned about the significance of the longhouse and totem poles that not only served as support for the roof, but were carved to tell a story. Cedar woven hats, often seen in pictures of Chief Seattle, also were typical of the Salish tribes who were known as a ‘high class’ people because they valued cooperation to get things done, thus never hungry, cold or without shelter. Many of these stories of cooperation were passed down to the young by esteemed elders through oral storytelling.

The Bellevue School District acknowledges that we learn, work, live and gather on the Indigenous Land of the Coast Salish peoples, specifically the Duwamish and Snoqualmie Tribes. We thank these caretakers of this land, who have lived and continue to live here, since time immemorial.
Copyright © 2023