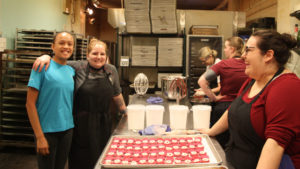 Written by Jackson Robinson, Class of 2018

Spending seven hours surrounded by sugary treats instead of attending school sounds like a dream to most kids, but for sophomore Anna Maria Malins it’s just regular Thursday. Anna’s internship is at Trophy Cupcakes in Seattle, and despite cupcakes in the name of her internship, most of her time is spent making macarons. Anna’s project at her internship is learning how to perfect the art of making a macaron from start to finish. Tawnya Kuhnhenn, Anna’s mentor, has been teaching her the steps, introducing a new step every few weeks. Anna’s day usually starts with cleaning the pads where the filling is piped on the macarons. During the middle of the day Anna works on piping (adding filling), pairing, brushing (some macarons have edible glitter or design) or sandwiching macarons. She ends her day packaging the macarons for transportation to Trophy Cupcake stores where they can be bought and eaten by hungry customers. 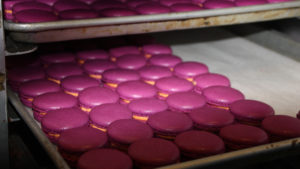 Anna’s main career interest is dance but she’s hoping to take the skills she’s learned at this internship to culinary school or at least she wants to use her skills to enrich her baking hobby. No matter what career she pursues in the future she’s still gained a plethora of transferable skills. She said, “I’ve learned responsibility, organization… also time management because you have to do stuff quickly but not too quickly.” When asked what her favorite part of her internship was she replied, “I don’t know, just doing everything.” Tawnya echoed this stating,” it’s been awesome, she’s very talented and she brings a lot of really positive energy to the bakery… she’s just been a pleasure to work with.” 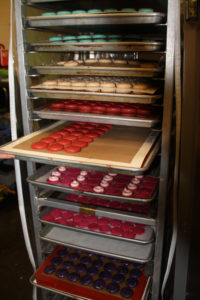 Anna’s project goal was to learn how to make macarons from start to finish, her mentor said, “the only thing we haven’t been able to teach her thus far is just making the actual batter, she’s worked on them a couple times and that’s really what I’m focusing on right now, getting her good at that.” With only one step left to learn Anna’s project will be ending soon and she’ll know how to make macarons of her own whenever she likes. Anna’s time at Trophy Cupcakes has been beneficial for both her and her internship site. Anna’s mentor remarked, “it’s like we added to our little cupcake family and I love it!” Anna’s positive energy and eagerness to learn raised the spirits of the whole team and provided them the opportunity to pass their skills onto a new generation of bakers.