文Á
Website Accessibility
(425) 456-4000
12111 NE 1st Street
Students
Families
Community
Staff
Welcome Back: Find out about the first day of school and other district back to school resources

Tyee’s Robo Thunder was one of the three finalists for the Think Award based on the quality of their engineering notebook documenting, their robot design evolution, teamwork, business plan, and community outreach.  In the championship playoffs, Tyee led their alliance in the second-to-last match to win with a slim margin of 254-250 points.  In this match all four robots were able to climb a steep mountain ramp, rescued “climbers,” and then hung from a bar at the top of the mountain.  In the final match, Tyee led their alliance to victory by a 268-192 score.  Their score of 268 was the top score in the competition. 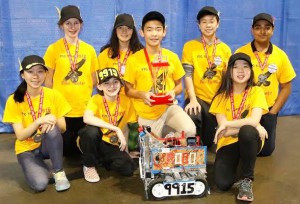 Along with eight other teams from around the state, the team has been invited to represent Tyee, and the state of Washington, in the “super-regional” tournament to be held in California in March.